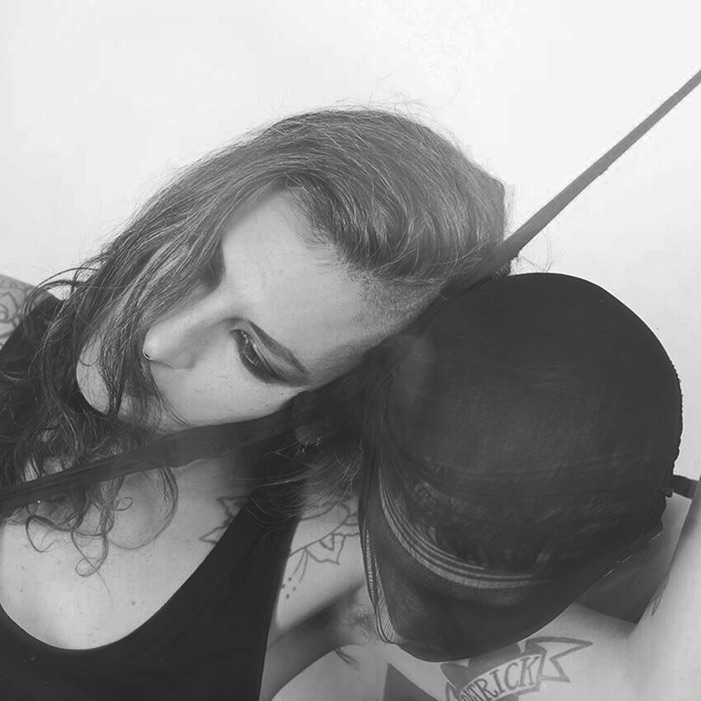 with Dryad and Peanut Ricky & the Fiends

Starting in 2014 as a collaboration between visual artist Heather Gabel and percussionist Seth Sher, the Chicago based industrial duo known simply as HIDE was formed. The following three years have seen HIDE crash through with a number of aggressively rendered singles and EP’s while quietly collecting the shattered pieces that would form their debut full length album, Castration Anxiety.

Those familiar with HIDE’s provocative live performances will already be accustomed to the hypnotic low-end and sinister vocal delivery that has become the band’s signature. The opening track, Fall Down, sets an eerie tone that permeates Castration Anxiety until the end. Throbbing pulses swirling around Gabel’s death laden mantras succumb to themes harvesting power from desperation and hopelessness.

The first single and video for Wildfire, keeps the same repetitive, dark emphasis but delves deeper into the ideas of the physical world rejecting its inhabitants. Harkening back to the slow, brooding industrial anthems from decades before, HIDE’s treatment of this sound is notably unique as it is familiar.
Tracks such as Fucked (I Found Heaven) and Bound/Severed ratchet up the tempo with a hedonistic dance floor séance. Each song ripping apart the ideas of empowerment and autonomy, throwing them back out to the audience in the form of Sher’s addictive rhythms, shattered EBM-styled samples whipped at the end of a leash, held in check by Gabel’s cathartic delivery.

Wear Your Skin unveils HIDE in a disruptive personal state. Churning electronics stepping up to anthem–styled synth melodies, disrupted sparingly by incantations of Gabel’s experiences about identity and obsession, blurring those themes into prophetic feedback.
The past few years has seen HIDE touring nationally, playing alongside related acts such as ADULT., Ceremony and Champagne Mirrors, as well as providing main support for Marilyn Manson during The Pale Emperor tour.