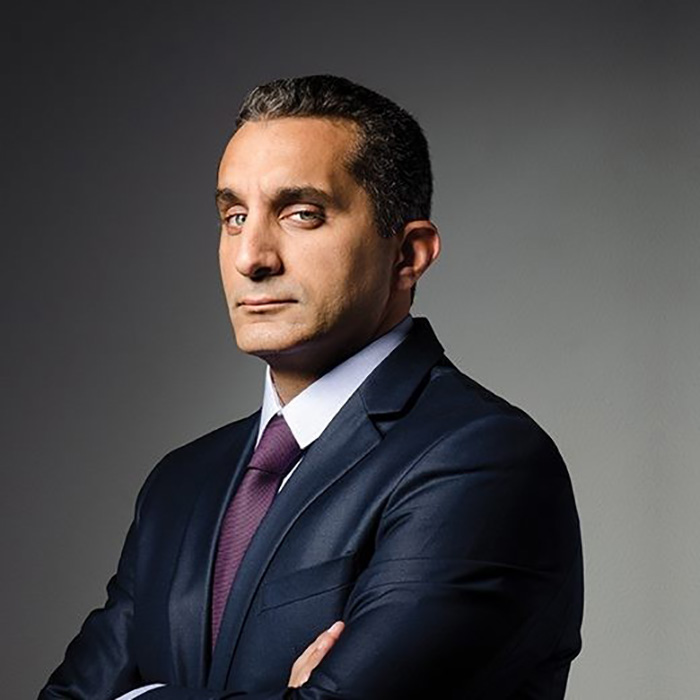 Bassem Youssef, dubbed the Jon Stewart of the Arab World, was a practicing cardiothoracic surgeon when he became the creator and host of popular TV show Al-Bernameg –the first political satire show in the Middle East. Originally a 5-minute show shot from Youssef’s laundry room and posted on YouTube days after protests in Tahir Square unseated Egypt’s ruling elite, Al-Bernameg became the most watched show across the region with 30 million viewers every week.

Throughout its three season run Al-Bernameg remained controversial due to its hilarious and bold criticism of the ruling powers. Accused of portraying “anti-Islam” sentiments and insulting the President, Youssef was arrested and interrogated before being released on bail. During its final season, the show achieved unprecedented ratings before Youssef announced its termination due to overwhelming political pressures on the show and the airing channel.

In 2013, Youssef was named one of Time Magazine’s 100 Most Influential People and was awarded the International Press Freedom Award by the Committee to Protect Journalists (CPJ). In 2015 Youssef served as a resident fellow at the Institute of Politics at Harvard’s John F. Kennedy School of Government. He has been a reoccurring guest on The Daily Show with Jon Stewart and recently hosted the 2015 International Emmy Awards. He is currently a fellow at Stanford University and resides with his family in the United States.